I’m human, I tell myself, with my head hanging after leaving a message on someone’s phone – in response to a question which shouldn’t have had to be asked, by an annoying person.

I like some people better than others, and other people not at all.

But it is seriously good for me to be reminded that good-hearted, though annoying, people share the Earth with the rest of us (they probably find me horrid), and they are NOTHING like bad people. END_OF_DOCUMENT_TOKEN_TO_BE_REPLACED

I went back to read a comment I had written on a blog, to see if there was a response, and I got horrified at my own words.

As a shorthand, I had written:

“‘Well’ people don’t SEE disabled people, and they don’t see them as mattering. They don’t see old people. Because every well person is scared to death of ending up disabled.”

I MEANT to say ‘PEOPLE with a disability.’ NOT ‘disabled people.’ END_OF_DOCUMENT_TOKEN_TO_BE_REPLACED

Please let me know if you have trouble with the navigation – thanks!

End of previous scene, followed by the link to the new scene:

“I don’t go to the movies. I read books. But I went to see Roland on a dare—with my sister. And I went back again. All by myself.”

Elise gaped at her. “Are you for real? It’s still in the theaters, opening in new countries every week. It won’t be ‘out on video’ for months.” She shook her head. “When you get back to your tiny little town, look it up in your tiny little local cinema—and then call me if it isn’t there.”

I can’t let the month of May, 2013 go by without marking the two-year anniversary of one of the most difficult decisions I have ever made.

Before I go on: I have no medical training. This is a story. My story. It is not a recommendation – and I may be the most foolish person to ever live for having done what I did.

Read if you like – but see your own doctor, and make your own decisions.

In May, 2011, heavily overweight and in fairly constant pain, unable to walk properly even with a walker, I received the news that an MRI showed further spinal disc degeneration ABOVE and BELOW the L4-L5 spinal fusion I had received over four years previously.

To tell the truth, I never properly recovered from that surgery, and now they were telling me I needed more – and that the problem would probably progress, and I would need further surgery later. They told me to schedule the surgery, that it would only get worse.

I walked away from that orthopedic surgeon’s office – and never went back.

That’s not the scary part.

The scary part is that somehow I made a decision to seek my own solutions – and somehow I won. 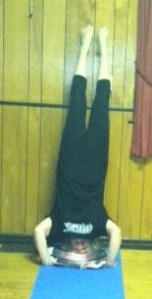 These photos are my proof. END_OF_DOCUMENT_TOKEN_TO_BE_REPLACED

I went out this afternoon and nailed the wild onions in the myrtle bed. I must have pulled out over one hundred onions that measured between a quarter inch and and inch-and-a-half in diameter. A huge percentage came out intact: onion bulb, stalk, and roots. 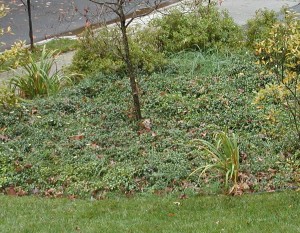 Earlier in the spring – with all the onions sticking out!

It took less than an hour.

I have been waiting for this day for weeks: first, we had to have had rain within the previous day or two, so the ground would still be moist. Second, END_OF_DOCUMENT_TOKEN_TO_BE_REPLACED

Writers and people with CFS (PWCs) have two things in common: they often need to control their environment – just to be able to think and work. Since I am both, I need it double.

I’m so noise sensitive that I can’t view the internet for very long – because the excessive number of moving bits on pages makes the graphics card in the Macbook come on – which leads to the Macbook turning on the fans – which leads to me staring at the wall, while the neuron assigned to thinking (I have two functional neurons – the other is reserved for breathing) takes on the task of blocking out the noise instead (we call this brain fog – you may have similar choice words for it).

So, for this and other purposes I shall identify later in the post, I have created for myself the Portable Sensory Deprivation System (PSDS) for Writers and People with CFS (PWCs). 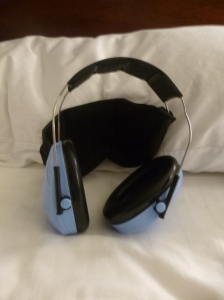 END_OF_DOCUMENT_TOKEN_TO_BE_REPLACED

[ETA 11/27/15: Want to see if you like the results of plotting with Dramatica for structure? Pride’s Children: Purgatory, Book One of the trilogy represented by the whole storyform,  is now available at Amazon – see sidebar.]

Kate Paulk, over at MadGeniusClub, postulates the question today, What goes where? She is a pantser (writes ‘by the seat of her pants’), but wants to know, “So, plotters, where the heck is the secret decoder ring to doing this at a conscious level? This pantser would really like to know.”

MY answer depends on how willing you are to have scaffolding in place when you write, and how much you know about what must go into each scene before you try to figure out who does/says/thinks what when. END_OF_DOCUMENT_TOKEN_TO_BE_REPLACED

End of previous scene, followed by the link to the new scene:

As the car floated away, she looked back and waved.

Andrew felt watched. Three fans waited in the icy night. He signed what they thrust at him, told them to go home and get warm. He let George hustle him back inside.

He had the distinctly unsettled sensation of having made a mistake.

Report on the second day of the Tumbleweed Houses workshop in Philadelphia. I’m home safe – but want to write down my impressions because there was just so much STUFF to learn.

Here is Ella’s kitchen from her blog, and the ladder to the loft, and above you can just see the edge of her loft bed: 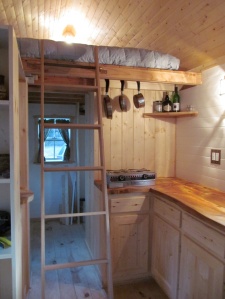 Thanks, Ella – I wish I could see it in person. If you are intrigued, she has wonderful photos of her ‘pink room’ in the back, and the rest of her tiny house, during construction and as finished.

It is possible to see the scale of things, and imagine yourself in the picture, in a kitchen – it looks so normal, not at all cramped or tiny or tinny or trailer-like.

And yes, in spite of all the excitement, I got FOUR naps today (Sunday evening) before setting out for home – and there was such a small amount of traffic that I got home from the Wyndham Hotel a block from the Liberty Bell (old section of Philly near Penn’s Landing – 400 Arch St.) in less than FIFTY MINUTES, END_OF_DOCUMENT_TOKEN_TO_BE_REPLACED

I’m in Philadelphia for the weekend, attending a Tumbleweed Houses workshop. I have been looking at tiny houses (Google the term) online for a couple of years now, attracted by the idea of living in a tiny, portable house – in my opinion, much nicer than an RV – and wondering how I would learn more about them.

Providence put a workshop near enough so that I could drive – I am meant to be here, because flying out to California just to do a workshop seemed a bit much when I hadn’t even decided how seriously I was interested. END_OF_DOCUMENT_TOKEN_TO_BE_REPLACED

If you are not willing to eat cheesecake RIGHT, you shouldn’t be eating it.

Why? Because even the no-sugar-added version I’m enjoying right now from Kennedy’s Cheesecakes in Hamilton, NJ, is labeled at 320 calories, x g. of fat, and x. g. of carbs (not sure what the ‘net carbs’ would be) – and costs around $1.50 per x oz. slice.

So, non-trivial on all accounts. END_OF_DOCUMENT_TOKEN_TO_BE_REPLACED

It’s not often in the real world that business people give away their secrets – but it is in the indie publishing world. Because theoretically, all other writers could be considered ‘the competition.’

Well, no – that’s not the way it works. Ask the romance writers: people who like romances gobble them up like unfattening candy. END_OF_DOCUMENT_TOKEN_TO_BE_REPLACED

Conclusion of what isn’t a whine: I’m putting this up for two reasons: first, to clarify it for myself while it is still fresh; and second, in the hopes it may help someone else. (First part here; second part here.)

3) How I hit the RESET button to get back to ‘better.’

I knew I had lost control of the sleeping process – and was powerless to stop the avalanche I had set off, even as I started dimly realizing I had brought a lot of it on myself. END_OF_DOCUMENT_TOKEN_TO_BE_REPLACED

Next part of what isn’t a whine: I’m putting this up for two reasons: first, to clarify it for myself while it is still fresh; and second, in the hopes it may help someone else. (First part here.)

2) Can I learn anything to prevent it from happening next time?

But then I started making mistakes I can see now: the in-laws call went very long. Then, since getting the kids tends to be rare (they have busy lives), once we got them, the calls went too long. I should have postponed them, strung them out, after a brief contact, for the rest of the week. But heck, they’re my kids and I love them and I want to talk to them. Each call went too long. END_OF_DOCUMENT_TOKEN_TO_BE_REPLACED

For re-entry ease: previous scene, followed by the link to the new scene:

The sympathy in his voice, too close to pity, stiffened her resolve. Time to go. “You learn to live with it.” She shrugged. “Which reminds me—it’s been lovely speaking with you.” She gathered the shreds of energy, rose, offered her hand. “You said you liked the books.”

George got to his feet. “Very much.”

PRIDE’S CHILDREN, Chapter 3 – “if he should gain the whole world”, Scene 5