SOMETIMES THE SOLUTION IS OUTSIDE THE BOX

Things get tied in knots; sometimes the only solution to a bad marriage is a divorce. But that applies in other situations:

Teacher/student – this teacher has it in for your kid, for whatever reason, and the only way the kid will survive is switching to a different teacher, or a different school.

Parent/child – the child must leave home to get away from a controlling parent OR the parent must eject the nestling which has turned into a cuckoo bird and is eating the family out of house and home.

Boss/employee – leave that job, if you can, before it eats your soul; fire that employee before she sets the factory on fire.

And one I’ve done once before, in many years in the system: if the main stressor in your life is a particular doctor, switch before they stress you into the heart attack they think they’re protecting you from.

The signs were many.

Because change is so hard for me and others with ME/CFS (usually entails MORE doctor visits, transferring of many records, finding the new person, hoping you don’t have an emergency until you’re comfortable with the new one, getting them to read all your paperwork…), we often stay too long with one who ‘at least fills out the Social Security paperwork.’ I don’t need that any more – but worrying about blowing a gasket (ie, stroke) from an occasional blood pressure spike is a sure way to spend your life worrying about your pressure, which RAISES it.

I had reached the point of considering my home BP measuring device an additional stressor, and the taking of the BP another. But I have friends who have had strokes, and it ain’t pretty.

It reached the breaking point a month or so ago when something (I have an idea now, but no proof) led me to have a BP spike DURING my semi-annual cardiologist visit, in their office. ONE measurement. They refused to take it again (to see if it would be coming down), and instead went to full alert.

Full speed ahead, man the torpedoes!

To make a very long story short, after having an abysmal experience with – and stopping after ten pain-filled, zombie-brained, gut-wrenching (lit.) days – another BP med, I switched cardiologists – to the one I just saw (and had met during one of my hospital excursions and noted he was a breath of fresh air then).

He says, not only don’t worry about it, but don’t measure it! He realized the process had become stressful, but that my record of measurements didn’t show a real problem. He suggested, since I need salt to maintain blood volume, and don’t follow a low-salt cardiac diet, that I might have had too much some night (yes, yes, yes! very possible – when I add salt to the occasional popcorn or nuts!). NO ONE had ever told me it could set off a spike.

He actually listened to my difficulties with tolerating meds, said I’d tried most of the first-line ones, and reacted badly, and that the next line of them would likely have even worse side-effects. But that he didn’t think I needed any.

I see him in six months, and the largest stressor on my list (death due to not taking the doctor-prescribed cardiac meds) vamoosed in a puff of smoke. Plus the secondary stress I was also ignoring: going to that office and that doctor. It’s subtle.

Changing was the right thing to do – and a serious object lesson: listen to your stress level. If a doctor constantly puts you on red alert, consider whether this is the best doctor for you. With the other one, I felt every time that I was defending myself from being put on medication I didn’t need.

Such a relief: I agree.

I should have listened. To myself. We’re not all alike; neither are they.

I was just worried the first one would prejudice the second one, and I would then have to go far afield to find… You can always stress yourself out.

And I learned that the salt I need may cause BP spikes. Good to know – will watch that more carefully.

Concerned about occasional blood pressure spikes, I asked the cardiologist to prescribe something with the fewest side effects possible, and was given a prescription for an angiotensin II receptor antagonist (ARB) called Diovan, which was filled with a generic called Valsartan – and I’ve again lost ten days of my life.

After I’ve had a horrible pain and zombie-brain time with it, I start getting more detailed with my research, and find out the Celebrex (my pain med and ONLY other prescription med, which I finally found after trying about thirty other things) and Valsartan (and not only other ARBs, but also ACE inhibitors and betablockers (my old pal from last year, metoprolol – which contributed to last year’s hell, and which I also won’t take again)) are contraindicated because each drug makes the other drug less effective.

Also, people like me, with ME/CFS, are often sensitive to even small doses of meds. Starting on a SMALL dose would make a lot more sense. Maybe they think it was a small dose. I don’t. Ask my husband about my pain-filled week+. I don’t like to spend a long period of time breathing through pain I can’t seem to get control over, while worrying about the extra load in painkillers and what they will do to me and my poor overloaded liver and kidneys.

Just generally annoyed – and farther behind – AGAIN. It gets tiring. And when they don’t even call back after a week after I reported side effects (they said they would), even more.

I halved the dose, then quartered it, then stopped. Five days later, I’m starting to regain control, and my mind worked last night for a couple of hours. Woo hoo!

And yes, I’m aware I’m two days late for Pi Day, and didn’t get any pie. Hope your life is more even-tempered.

And I’m still worried about those occasional spikes. But no med will help if I CAN’T TAKE IT! 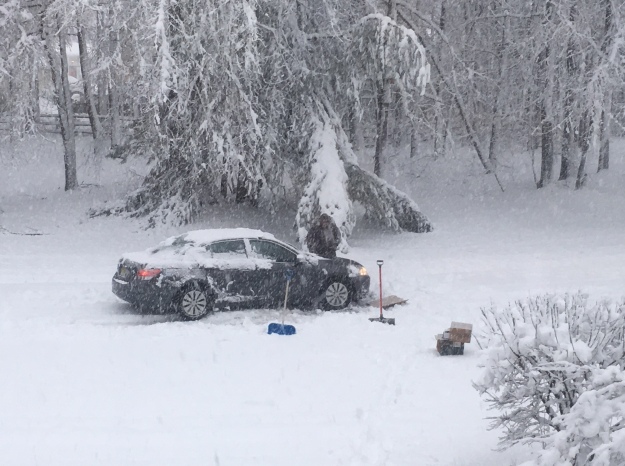 A quick update to anyone wondering why there haven’t been any posts in a while. Busy, is why, and no brain.

We are moving at the moving thing. Have had professionals in (yeah, we’re too old to do this one) for almost every aspect of the process of getting this house ready for sale. A person with CFS can’t do this. A person with CFS is doing this. Ergo, very little writing stuff.

Just had a huge load of snow dumped on us. And it’s still snowing. At least 4″, maybe more, and the neighbor’s car is stuck in the street outside my house. Will it finally be our last one here? Depends on Mother Nature.

Still the goal (I hope), but we haven’t been able to get out there to look, so aren’t even on a waiting list. The process slowly accumulates data, though. I have a better idea of what to look for in end-of-life care after our parents have all gone before us from Jan. 2014 to Jan. 2018. They all lived long lives (91, 91, 94, and 97), and we will always miss them. Some of their later years were NOT fun – possibly we can learn from them. One thing we HAVE learned is to get out of this house and leave affairs in tidy order, because it gets much harder with age. I simply can’t imagine how other people wait until they’re 85!

Still working on getting reviews – just got a very nice one from the Midwest Book Review. Found a few tiny typos in PC1, and am just perfectionist enough to be in the middle of reloading the corrected files, and just human enough to tell you there are two errors of typography that I cannot correct. I have failed, they “doesn’t shows,” as my Uncle Charlie would say, and they will stay there to avoid tempting fate. 2011 Mac version of Word is to blame, and no, I’m not telling you what they are. I have some Pride.

Sent off the next finished chapter to my beta reader last week. I am proofing and editing solidly before sending things out now, a chapter at a time, but long chapters (13K) take a while to research, write, and edit. I hope the rest goes a bit faster, but can’t wait until I’m someplace else and all the junk is gone, even if I have a simple table and one chair.

Finally agreed to try a new blood pressure med, Diovan, an “angiotensin II receptor antagonist,” whatever that is, supposedly with fewer side effects. After the debacle of last year, the only thing that made me reconsider is that I’m under quite a bit of stress right now, and occasionally get BP spikes in the evening, an alarming state of affairs. If I can find something I can tolerate that does its job, possibly I can avoid blowing a gasket until we’re resettled. Started up my cardiac rehab again (up to 75% of before) after getting the flu – and being out of commission for three weeks. Plus the flu gave me higher blood pressure, and kicked my nice low 60-66 heart rate up to 100 – MOST uncomfortable, because I COULD not meditate it lower. There are many reasons your BP can be up – perfectly reasonable reasons, but that doesn’t protect you from the consequences, so I’m being sensible. Again, assuming I can tolerate something. Not hopeful, but maybe it’ll give me a breather. Oh, and I’m in the process of finding a cardiologist who doesn’t RAISE my BP. Wish me luck. NOTE: since I started taking the stuff 3 days ago, I haven’t been able to THINK, but then there is that stress…

So that’s it, my pretties. Boring as all get out, but you are updated in case you were wondering, and I’m trying to do about ten times more than I can (sang in church again, FINALLY, the last two Sundays). And resting aggressively so I can be there mentally for my assistant as I am the final arbiter for dejunking. Hate it, hope a lot of it will be over soon, and I can get back to my nice calm writing.

And how are YOU?