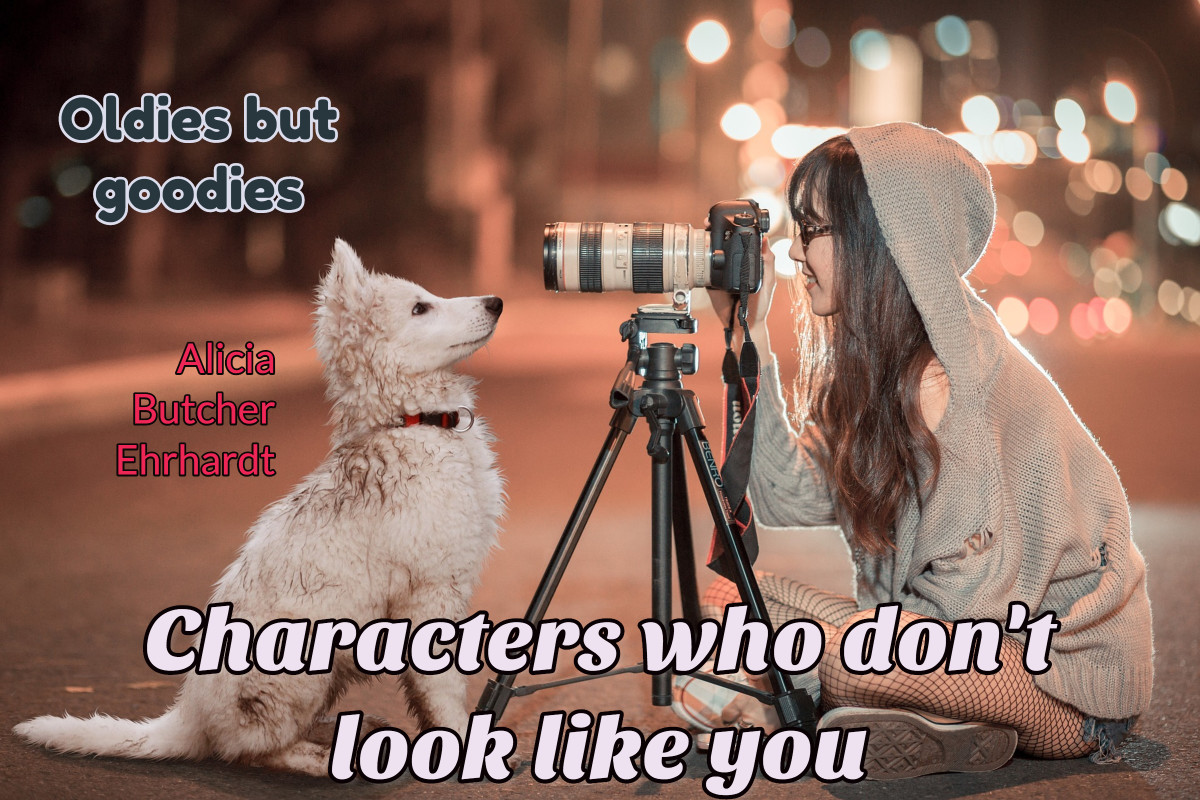 HOW FAR MUST YOU MORPH?

Readers have always been able to switch gender; well, female readers have often had to – there wasn’t much to read with positive heroines when I was growing up, not in popular fiction – it’s amazing the number of women scientists who pay tribute to Nancy Drew in their background!

I’m sure the number is dropping, because there are more role models, and some writers deliberately create unrealistically powerful young women as characters, hoping to up the ante. (Yes, I’m perfectly aware of all the advances made in opportunities for women; but that the situation for women in physics, for example, is not much different from what it was in the 1970s when I was in grad school.)

The ability to imagine yourself as a shape-shifter or an alien is part of being a reader – and even more important when a lot of the characters are not like you.

Diversity is the Holy Grail

Though more honored in the breach than in the observance, still.

And readers are only willing to go so far before they’re not interested, requiring a modicum of something they can identify with.

Does your character make readers uncomfortable?

When I set out to tell the story of Pride’s Children, I was originally driven by a sense of the unfairness of society toward those who have most need of its kindness.

There are two USUAL ways to deal with disability in a character: as a decoration or as a problem.

The first – a ‘feature’ of a character – gets mentioned every once in a while, but doesn’t seem to stop the character from doing most of the things ‘normal’ able people do. And it mostly leads that character to be a secondary character, a sidekick, the ‘friend in the wheelchair.’

The second leads to ‘inspiration p0rn’ (avoiding search engine problems here), and the solving of the ‘problem’ consumes the space dedicated to the story, with inspirational results – problem solved – or, sometimes, the character’s death (in a disturbing trend, by suicide while making life easier for those left behind).

Ignore the fact that suicide has a horrible effect on the people left behind. Most of us know of someone close to whom that has happened, and know they would do almost anything if they could go back in time and help.

Disabilities are far more abundant than people think. If you count all disabilities – and I do, of course – estimates run over 20%. Don’t forget the invisible ones: FM, mental health issues, pain, CFS, non-visible genetic ‘abnormalities,’ a thousand things that make life difficult for the disabled person, but generate wrath in observers who watch them use the handicap parking space. Don’t forget old age and its common memory and mobility problems.

The counting is made difficult because of a human tendency to hide problems if it is at all possible, so you will not be ‘different’ or ‘other,’ and attract unwanted attention. Presumably there was some evolutionary benefit to getting rid of tribe members who would slow you down when your tribe was in the hunter/gatherer phase (a rather long time ago).

We ‘pass’ for normal/able as long as we possibly can, which also makes us suddenly appear very disabled when we can’t pretend any more.

Animals do it, too – everyone knows of a pet who didn’t let its owner know something was wrong until it was far too late to help. Wild animals do it so as not to appear vulnerable, as the weak and the sick are noted as easy prey.

But there is a different way for a writer: reality

I have taken the step of writing a disabled MAIN character, with a significant disability, which she ignores as much as possible, and bows to when inevitable.

For this disabled character, writing is a job – and she’s been successful at it, very slowly – and by staying hidden from the world.

…while much of the plot centers on the cautious romance, Pride’s Children is also about a writer’s way of interacting with the world, living with a chronic condition (CFS – … I realized that I couldn’t think of any book I’d read, recently, involving a character with a disability or chronic illness – a significant hole in terms of diversity), and the struggle to remain balanced and kind when new people and routines enter one’s carefully-ordered sanctuary…

Disability is a learning experience

Those who are or become disabled have a steep learning curve: everything is harder. Moving, learning, thinking, being independent, even making new friends – all these are more difficult the farther a character is from the norm.

And the effects are interwoven: difficulty reading means trouble holding a job, getting to that job on public transportation or by learning to drive. No disability is purely one thing you cannot do.

There are few disabled characters in fiction (which is why they stand out) because writing them is extra effort. It’s easier to write about kickass heroes and heroines who tough it out through thick and thin and keep on ticking.

Just tonight we watched, in the same show, a character get stabbed in the back by an enormous kitchen knife embedded at least four inches by the blood shown carefully on the blade when it was pulled out by the stabbed character, who then went on to limp a bit while he walked around, interacted, and finally was not shot by the police detective – and who survived with no visible effects by a short time afterward; and a character poked at in the stomach by a little knife who died instantly. Neither of these seemed at all realistic – but the plot required one survivor to talk and talk, and the other to be removed quickly from the scene.

In the same way, disability in fiction is mentioned when necessary to make a quick plot point – but not there pervasively.

I have written about how properly-constructed fiction is uniquely helpful in creating empathy in humans because it allows them to live alongside a character the life affected by the choices the author has made (type ’empathy’ into my search box).

They do, however, have to read said fiction, which means it has to be surrounded by the best entertainment the writer can provide.

I’m not surprised there aren’t more disabled characters, but I’m disappointed that indie isn’t more of a place where, since the big publishers are not supervising the product, there are more disabled, diverse, and simply ‘different’ characters and stories.

But there is that pesky thing about having to write well to sneak the empathy bits in under the radar. It takes more space, more words, more time.

It is MUCH harder to market.

I still think it’s worth it.

22 thoughts on “Can you relate to imperfect characters?”