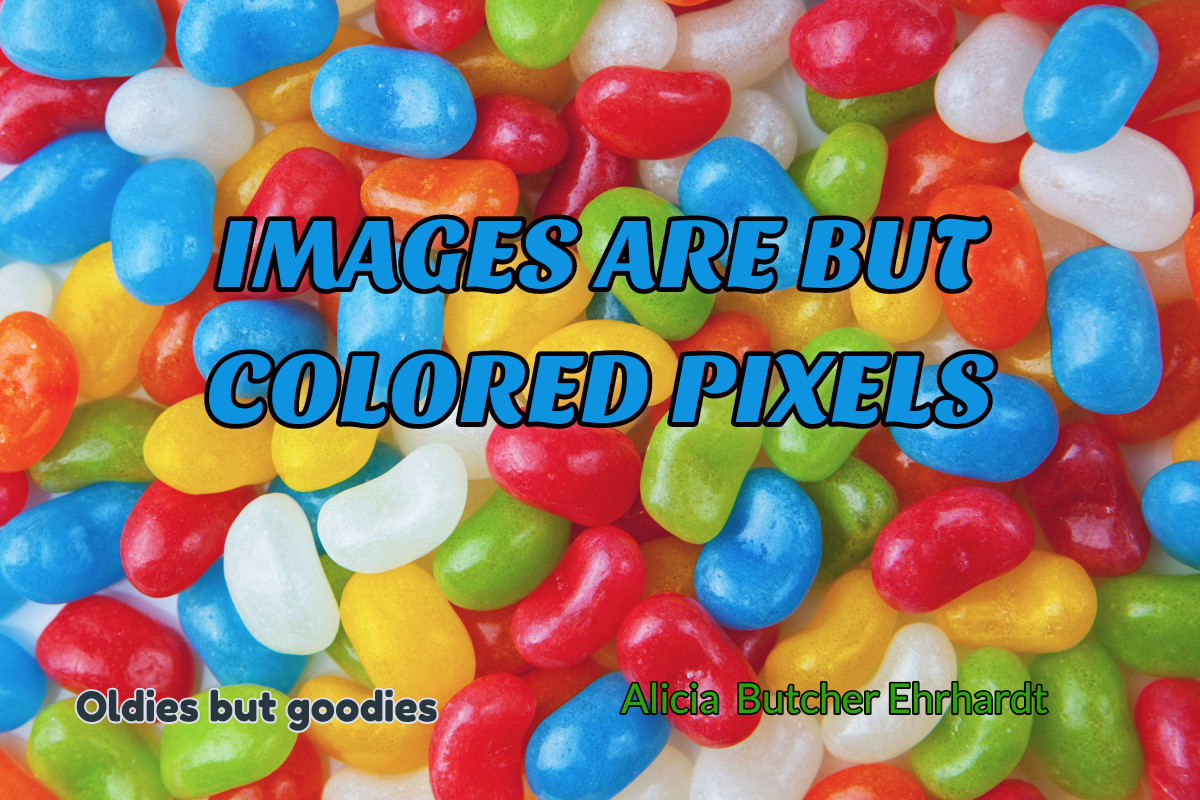 FICTION IS BUT BLACK AND WHITE DOTS

We are getting spoiled by high resolution. Actors now have to worry that every pore is visible to the folks at home. Photos take a lot of storage space – megabytes – because we can, and because we have Terabyte hard drives.

Most of us will never have occasion to use that detail, and we don’t want to write books that are that high resolution, either. Among other problems, they would take forever to read!

Even in the most connected and most fluid writing, choices have to be made. Which sentence follows which, which word is best. The basic principle of fiction is that reality cannot be duplicated, merely suggested.

When a painter uses a few strokes of red to suggest a roof, she must trust that the viewer will infer internal beams, two-by-fours, and nails to support that roof from the fact that the roof does not fall. Worse, even ‘fall’ is a suggestion: the painter does not ‘do’ gravity: the unsupported roof will not slide off the bottom of the page when the canvas is hung.

Reality consists of unimaginable numbers of tiny events, linked together by time, infinitely stretching in all directions. Fiction picks the stars in the skies as points, leaves us to connect the stars with planets, deep-space debris, and light.

So it doesn’t really matter which points are chosen, in some sense, because the same writer, on the same day, could select an entirely different set, and still tell the same story.

Beginners to digitization are astounded at how few black and white pixels it takes to express the iconic Abraham Lincoln. But even those few points are a random choice, because starting at each of a million different points, there are a million similar-but-not-identical digital Lincolns.

But what level of detail is REQUIRED for fiction?

It is only necessary to cover enough of the central story, at the chosen level of detail. “Wedding dress for sale. Never worn.” is in some sense exactly the same as “Great Expectations.”

What a writer strikes for is balance. For each type of story there are conventions, rough guidelines. An action thriller which spends half of its 300,000 words in interior monologue of its twisted dark protagonist is a deliberate contravention of the genre’s best-selling exemplars. It CAN be done, but must be written exceedingly well, and even then the audience for it will not be all thriller readers – because most of them want taut action-packed, skimpy-on-details, fast-paced writing with its interior monologue limited to “They killed my wife and child and now they will pay.”

Possibly, if done well, the audience will broaden to include readers who like longer stories, who appreciate the extra background, the crossover effect. A gamble. Done deliberately and competently and in a controlled manner, it may pay off. May.

How do you sketch a good-enough approximation?

I come by these thoughts today free of charge as a short scene–which had completely halted progress for over a month–suddenly resolved and melted into ink on page. I stopped trying to find better words to do what I was doing. I realized the words already there were a good digitization of the reality I was trying to portray–and that there is not a single perfect version of this scene which I have to locate somewhere out in the ether.

Life, complicated, millions-of-tiny-pieces life, had been getting in the way. I’m amazed at how few words needed changing, how few words I needed to add to what I already had. It is a good-enough version of the story reality. It isn’t missing any key pieces.

Time limits how much a character can do, say, or think

Finally, I could experience it from the inside of the head of the character whose point of view it was. In a few places, I added what she thought and felt to what she experienced–just a few touches restored that sense of balance.

I changed the places where I showed through: where her words would be different from mine, I chose hers. Mine were better–hers were hers. She comes from a part of me I disallow sometimes, with my over-educated, over-read self-image. She WANTED–in a way I rarely allow myself any more. I let her speak instead of censoring her–and the scene finished itself.

I love writing, because I get to choose the level of detail needed to tell the story my way.

My happiest readers will be those who like my granularity, somewhere between Hemingway and Rosamund Pilcher (or worse, Proust), whose brain needs the same distance from the subject. And it doesn’t hurt if they like my stories.

How much detail do you need?

4 thoughts on “As close as writing can get”