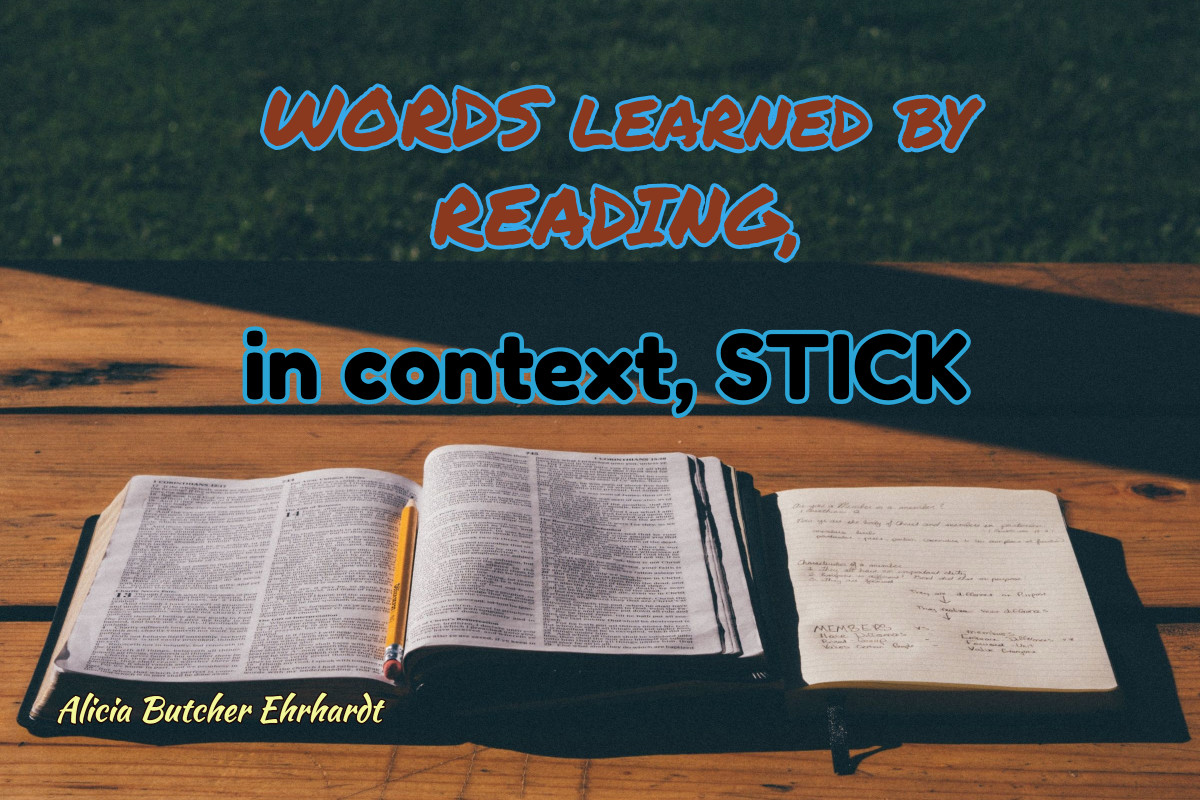 STUCK WITH THEIR HEAD IN A BOOK

That’s where the young readers are, when they can get away with it. I was.

I kept books in three locations in our house in Mexico City, and snuck around so my mother wouldn’t find me and want me to do something – but I always had a book. In English. Of what was around the house, including my parents’ collection of the Great Books (only the half I liked) plus the James Bond novels and such my father brought home from business trips..

It is like an addiction, pouring words into your head.

Many people learn the pleasure of reading later – and do perfectly fine with it. But there is a subset of humans who are bookworms from a young age, and once they discover the printed word, can’t get enough of it.

My readers tend to be in that group.

Figuring out words in context is a big part of that

If you read material that is probably too hard for you, you’re going to run into words you’ve never seen before. That’s when the vocabulary starts to build: you don’t understand the sentence a word is in until you have some tentative meaning for the word, so you guess, store it away as a ‘possible,’ and move on with the story.

Do this enough times, and that word will get its meaning altered a tiny bit each time you run into it, because each place you see it will give it context, and eventually most words will have a complex meaning that settles pretty close to what you’d find in a dictionary.

Or you could ask someone (mom, teacher…) or look it up, and nowadays touch it on your Kindle and have the meaning pop up, but all those things take more time and interrupt the flow of the story, so many of us reserved that for rare occasions, and just kept reading.

English is an incredibly rich language (we steal anything we don’t have, and, voilà, it’s English now), and I can find the perfect word for most applications – with the nuances I’m looking for.

My readers don’t need anything explained: they either know it already, or they will be fine figuring it out in context.

Mind you, I’m not looking for the truly ‘literary’ one-of-a-kind only an English professor would know them words.

Just the words that I’ve acquired from all those books I’ve read – without paying specific attention.

The only ‘class’ I’ve ever taken in ‘English’ was the Freshman English course I took when I transferred as a junior from UNAM in Mexico City to Seattle U., which it turned out later I didn’t need to take.

That class also got me to write the only term paper I ever wrote, something wild about the psychological significance of Wuthering Heights, and for which I immersed myself in the literary criticism journals at the SU library, which had articles such as ‘The Window Motif in …’

I had fun, I got an A+, and never before or since was exposed to language that way.

Pride’s Children is just where it all came to roost.

They said, “Write the novel you want to read, and can’t find.”

‘They’ were right. It has been great fun just letting a novel be what I wanted it to be, and using everything stored in my very odd and now damaged brain exactly the way I want to.

That’s such a charge.

Here are some of those words from Chapter 27 of Pride’s Children NETHERWORLD, which I just finished writing, and am now polishing up to send to Rachel, my wonderful – and omnivorously trained like me – beta reader. AutoCrit, my editing assistant software, flagged them as ‘uncommon in general fiction.’

Not really that tricky, are they?

But you don’t hear them much, and they like to get some attention, too.

Thanks again to Stencil, which allows me to create graphics with very little effort – and wonderful photos. When I need more than a few a month, I will definitely get their paying version. Meanwhile, I mention them here every once in a while, in case others need the same capacity. 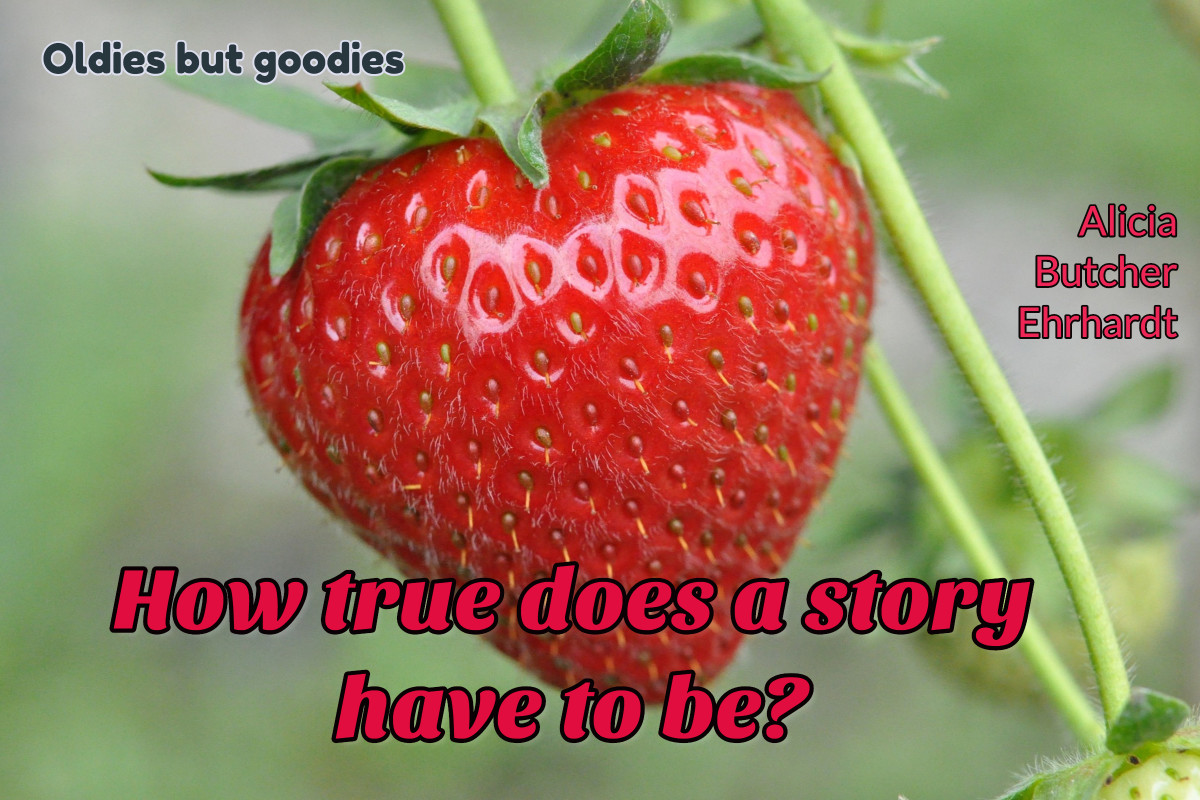 IF YOU WANT ‘TRUTH’ WRITE MEMOIR?

Knowing that memoir, non-fiction, history… all are someone’s version of  ‘the truth’ or ‘what actually happened.’

Back before I finished Pride’s Children: PURGATORY, I remember wondering whether it was okay to tell a story that would take quite a lot to be true, and yet should feel absolutely as if it was true, as all fiction that lasts does.

The image above, or a very ripe strawberry, reminds me of one of the early scenes in Firefly (one of our family’s all-time favorite TV shows), where Kaylee acquires an amazing strawberry from Shepherd Book, as part of his passage on the ship.

Is the idea better than the reality?

I can’t eat one – and we have them daily here – without thinking of the look on her face as she bites into the perfect fruit. All of them aren’t that perfect, but we don’t care – the idea of  ‘strawberry’ is a powerful umbrella which covers a little imperfection here and there.

I stopped worrying, went ahead and finished that part of the story exactly as I had planned, making it as true as I could make with smoke and mirrors.

I’m trying to do the same sleight-of-hand with the next volume.

One of the things getting in the way of getting on with editing Pride’s Children, the WIP, is an insidious little voice in my head saying, “That could never happen!”

My brain tells me I shouldn’t write the story of someone who gets something in the story she would never get in real life – and that it would discourage people with similar problems from even thinking about what happens in the book – lest it give them FALSE HOPES.

And then I remembered that’s why humans tell stories.

In stories, the ugly duckling turns out to be the swan, more beautiful than all those picking at him. And Cinderella, the girl whose stepmother and stepsisters treat her like a servant, marries the Prince.

The point is – if we don’t tell stories and read stories – all we have is reality. Reality is harsh. If it were not for stories, humans would all die early by ‘failure to thrive.’

We need stories in which there is hope.

That it may be temporarily false is not important. If we mature, we will grow up to discover our own place, our own story, our own Prince – our own way to be happy. Either we will become President – or we will decide it is too much work to be President, anyway.

Children – and I think most people can remember being different, wanting more than they had, wishing they were more popular, or their parents had more money (so they could have that pony my eldest still asks for – at 26) – don’t have the tools to create their own reality where they are happy. Stories teach them (and adults who are still struggling with the same questions) those tools, or at least, that there ARE tools.

My story, if I am successful in my aims, will let someone spend a bit of time thinking ‘this could be me, this COULD happen,’ and thus keep that someone happy enough to keep trying for another day.

That is a good enough reason to write.

This time every year some version of the Wikipedia fundraising banner appears. I automatically send them money – because, without Wikipedia, a writer can’t function. And my husband, now retired, still uses it all the time.

They are a NON-PROFIT and don’t ask much:

“We survive on donations averaging about $15. Now is the time we ask. If everyone reading this gave $3, our fundraiser would be done within an hour.” Donate link

While I’m at this, I’d also like to thank the invisible army of volunteers who write the information, edit it, update it, footnote it, and check each other for accuracy, all for nothing but being of service – to me.

Send them a few bucks – feel happy for the rest of the year.

Every year some version of the Wikipedia fundraising banner appears across the top of the page when you go to get your dollop of information. I automatically send them money – because, without Wikipedia, a writer can’t function. And my husband, the teacher, uses Wikipedia all the time for useful information of all kinds for his chemistry and physics students.

They don’t ask much:

“DEAR WIKIPEDIA READERS: We are the small non-profit that runs the #5 website in the world. We have only 175 staff but serve 500 million users, and have costs like any other top site: servers, power, programs, and staff. To protect our independence, we’ll never run ads. We take no government funds. We survive on donations averaging about $15. Now is the time we ask. If everyone reading this gave $3, our fundraiser would be done within an hour. Wikipedia is something special. It is like a library or a public park. It is like a temple for the mind, a place we can all go to think and learn. If Wikipedia is useful to you, take one minute to keep it online and ad-free another year. Please help us forget fundraising and get back to Wikipedia. Thank you.” END_OF_DOCUMENT_TOKEN_TO_BE_REPLACED

If you’re anything like me, when a new subject comes up, and you need to do research, you do a search (Google or otherwise), and end up for starters at…WIKIPEDIA.

Why? Because they never fail to have SOMETHING, written in reasonably clear English, that serves as an introduction to whatever it is you were researching. END_OF_DOCUMENT_TOKEN_TO_BE_REPLACED